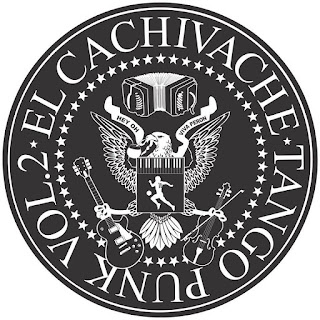 With their album “Tango Punk Vol. I the El Cachivache Quinteto surprised their audience.They revitalized nine traditional compositions and underlined that each generation has to find their own approach to reconnect with their history and carry it further. Now their album “Tango Punk Vol. II” is out, and no, it is not a sampler with some more traditional tangos. They intend to convince us with 11 of their own compositions.
Six tracks are from pianist Pablo Montanelli, four by guitar player Vito Venturino, and one by Argentine composer-guitarrista Julian Graciano. Again the quintet plays with verve and enthusiasm and can easily convince a young audience. Of course I have my favourite songs, namely the lively and propelling “El Viajero” and “Se hizo de Noche” which are difficult to resist. One of their ‘strange’ compositions, “Fetiche”, is rather more post-rock than anything else. “Transylvanika” is a really beautiful vals that invites you to dance (although I didn´t care so much for the bottle neck guitar parts).
Víto Venturino said that they wanted a ‘live’ sound for this recording and that all tracks were thus recorded simultaneously. However, this means that also several problematic moments of intonation on the violin were also retained, which decreases one’s listening pleasure in some tracks (i.e., “Celosamente”).
Nevertheless, with their dauntless and forceful approach, the El Cachivache Quinteto will surely become one of the next influential ensembles in the contemporary tango scene. Definitely go and see this band!