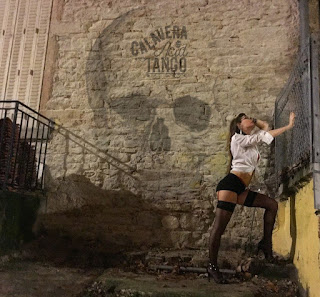 The masterminds behind the electrotango formation Calavera Acid Tango are the producers Nicolás Dworniczak (piano and synths) and Pali Recanatini (bandoneon). They came together as an ensemble in San Telmo since 2015 to mix tango elements with electronic music styles (hip-hop, dubstep etc.). The songs are dance oriented and live by their sequencer pattern, common harmonic piano progressions and syncopated bandoneon motifs. The texture of the productions is modern and uses interesting effects one may expect in this genre. The music is produced to be consumed by the dancers, and obviously several like what they hear. However, I miss strong hook lines which makes it easier to remember the songs, I miss the Unexpected which makes me pause in amazement.  The music flows away without significant highs, which is ok for the milongas, but I prefer music which touches me emotionally. For me, their strongest track is “Ni una sola palabra de amor”, and I can listen to it again and again.