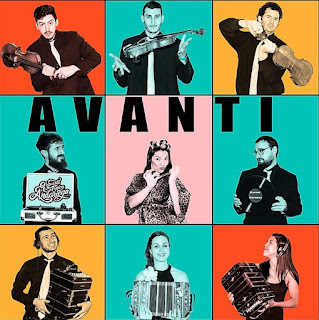 Musical director, arranger and double-bass player Luigi Coviello is a busy men: His Orquesta tipica Andariega is out with their forth album. His other project, the Sexteto Andiamo can be seen as the smaller version of the OT Andariega, with often similar but nevertheless different repertoire. Here we have the full sound of a typical tango orchestra with three bandoneons (Stine Engen, Roberto Vasallo, Yanina Corvalán), six violins (Mai Prieto, Maria Bice, Tomas Quindi, Gonzalo Lesta, Santiago Zamboni, Ivan Di Luca) and one viola (Flor Gomez), piano (Matias Gonzalez) and double-bass (Luigi Coviello), and now with guest singer Marisol Martinez. The song selection of Avanti is diversified and appealing, including several traditional tangos, three of Luigi Coviello´s own compositions, and one unexpected song, “Creep” from British Alternative Rock band Radiohead. “Creep” in this version has no problem to be accepted as a great tango. “Buonasera” and “Lontano” are two lively valses written by Luigi Coviello; they are simple and clear in their melodic development.


I like the three songs with guest singer Marisol (Noelia) Martinez which give the sound of the ensemble something unexpected. She has a wonderful alto timbre which contrasts wonderfully with the violins in “Al compas del Corazon”. In “Un giorno ti diro” from Italian composer Francesco Kramer Gorni she is more a solo singer rather than a tango orchestra singer, and she won´t let me go off the hook any more.


When I listen to their albums within eight years, they clearly have a stable base of good arrangements and excellent musicians, a wide variety of interesting songs, and also attractive own songs to please their audience. - Dear milonga organizer, this ensemble is a safe bank to entertain the dancers and not let them off the dance floor.