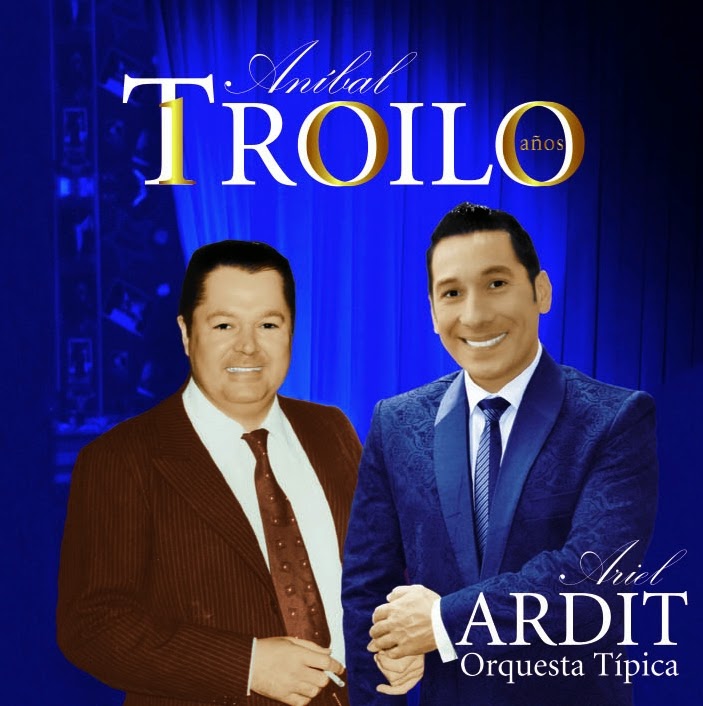 With this album, Ariel Ardit and his `orquesta tipica´ (with 3 violins and 1 viola, 4 bandoneons, 1 double bass and 1 piano) celebrate the 100th birthday of highly influential bandoneonista-composer-director Anibal Troilo (1914-1975).The homage includes 16 of Troilo´s `Golden Age´ hits (ok, “Desencuentro” was published 1962) and one contemporary song dedicated to the “Thick Angel” (“Angelito Gordo”, written by Javier Sanchez).
The project started as a `spontaneous idea´ when Ariel Ardit and his pianist-arranger-director Andrés Linetzky were waiting at the airport. The singer explained that he was moved by Aníbal Troilo's sound and sensitivity. His distinctive format was an exquisite `orquesta tipica´ - and the simple fact that today Ariel Ardit and his ensemble have a similar approach encouraged them to take the “historic opportunity to honor him on his 100th birthday”, the vocalist commented.
Andrés Linetzky has carefully adapted the old tangos for today´s audience, and has preserved the `old spirit´ with sensitivity and good taste. The pleasant arrangements are focused on the outstanding vocalist rather than on the orchestra, and no one would complain about it. Although Ariel Ardit has to compete with the original singers of the classical tangos (i.e., Francisco Fiorentino, Jorge Casal, Edmundo Rivero, Floreal Ruiz, Roberto Rufino, Roberto Goyeneche etc.), he definitely can keep up with the `old guard´. From my point of view, he leaves several of them behind.
Ardit refers to the tango tradition which endured from generation to generation. This album full of bitter-sweet nostalgia certifies that the old songs are still vital and very attractive in their new clothing. Not surprisingly, Ariel Ardit mentioned that Troilo´s “tangos bring us closer to the purest reflection and deep feelings." The singer and his orchestra interpret the compositions with passion and dynamic verve, and a bright shining smile because they do know that they already have us on their side.

This review will appear in issue 1 of Modern Tango World